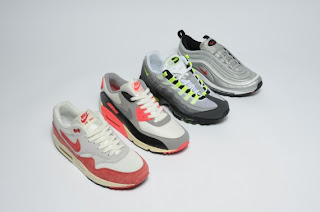 As I have a lot of admiration for original vintage trainers I'm not a fan of vintage effect soles/detailing on repros. Out of this pack of 4 I would only purchase the following two pair's:
I had the 97's when I was around 10. They cost £110 if I remember rightly as they were a women's release. I literally had to beg and plead with the mother to get them. Unfortunately for her, the view that I would eventually "Grow out" of trainers never happened so as a kid I guess it would have been quite costly to fund my addiction.
Back then I loved trainers as I was a tom boy and was influenced by what my older brother and his friends had on their feet so my love affair of trainers began. It wasn't until I got to around 12 that I started taking care of them.
The second pair that I had and would like to own again are the 95's that I loved in my early teens. Thankfully having size 3/4 feet they weren't as expensive as the 97's and this time around came under the kids category. 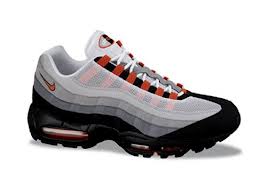 I remember also having the grey/orange and white leather/yellow 2000 Footlocker exclusives too. By far, the 95's are one of my favorite styles. 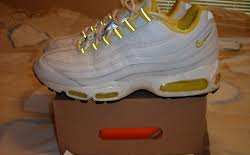