So with the Olympics coming up in a few months the Adidas Originals marketing team are at it again encouraging all sorts of interaction with their fans/customers.

They have currently launched a competition that involves uploading Adidas inspired  to their site in order to win prizes.

These nails have to me one of the best images on there! 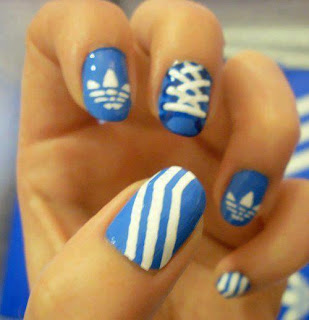 Now I dont have sausage fingers but I know if I attempted this, it would not look as good as this.
I think a venture to the Wah nail salon in London is in order.
http://a.did.as/ImktDI
Share 0 Tweet 0 +1